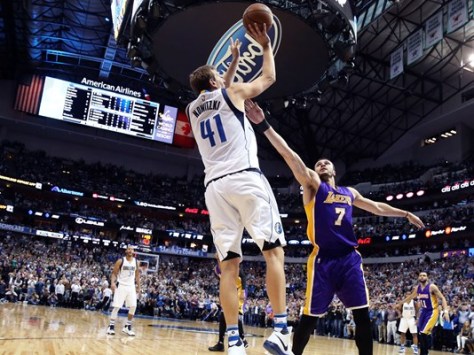 Recently, Dirk Nowitzki of the Dallas Mavericks became one of six players in NBA history to score 30,000 regular season points, joining Wilt Chamberlain, Michael Jordan, Kobe Bryant, Karl Malone, and Kareem Abdul-Jabaar. Congrats came pouring in, not only from fans, but players and coaches as well. To me these kinds of accomplishments are especially noteworthy–the kind that can only come from sticking with it and staying devoted for a long, long time. Dirk began his NBA career with the Mavs in 1998.  He’s seen a lot of players come and go and outlasted a lot of temporary flashes in the pan. I read recently that in practice Dirk playfully told Mavs guard Seth Curry “I shot over your daddy (Dell Curry). I’ve shot over your brother (Steph Curry). Now I’m shooting over you.”  Seth Curry was 8 yrs old when Dirk started playing NBA basketball. There’s a special satisfaction and reward that can only come through longterm faithfulness. I think theres a lesson in what Dirk has done in the NBA that we can apply to our lives as Christians.

We live in a world that is preoccupied with the immediate. We want things to happen overnight, or we are quick to lose interest. But much of the Christian life is not like that at all. Much of what we are called to is a long obedient faithfulness in a godward direction. Sure, there are a few game-changer moments along the way, but much of the Christian life is made up of small acts of faithfulness, lived out day after day, year after year.

A couple of times I’ve eaten dinner in the American Airlines Center restaurant that overlooks the Mavs practice gym. It’s where the players get in extra game-day shooting reps and work on improving their game before they go out to warm up with the team in front of the fans. Typically the practice gym is occupied by young players, guys recovering from injuries, and you guessed it–Dirk. He’s constantly doing those little things, over and over, that make him a great player. I’m told that even at age 38 he’s still a “gym rat” meaning he’s ALWAYS in the gym. A desire to be a longterm successful NBA player has required Dirk to commit to doing things he knows he needs to do even when he doesn’t feel like doing them, or when no one else is doing them, and even when no one else is looking. Does that sound familiar? The same is true for us in our spiritual disciplines. No one is going to hold our hand and make us read our Bible, pray, and worship regularly. There won’t ever be an Oscar award given for acting in integrity, but we pursue it anyway. Why? Because we know it’s worth it. We know GOD is worth it. God tells us in 1 Timothy 4:7 “discipline yourself for godliness.” It’s been said, and rightly so, that nobody stumbles into holiness.

Anything that God has commanded us to do is worth our longterm, diligent, commitment, and devotion. Let’s not trade the sweet satisfaction of longterm faithfulness, for something shallow and temporary. And as much as I love Dirk and the Mavs, faithfulness to God will get us far greater rewards than 30,000 career points! (See Matthew 6:19-21)

Here’s a great verse to read and think about on this subject:

…let us also lay aside every weight, and sin which clings so closely, and let us run with endurance the race that is set before us, looking to Jesus, the founder and perfecter of our faith… Hebrews 12:1-2

PS, I think Dirk is the greatest Dallas sports figure of all time. Who do you say is the greatest? I’d like to hear your opinions! Nolan? Aikman? Staubach? Jeff Kunkel (just kidding)…

A vid from my church as part of pastor appreciation. I have the best church family on the planet.